The Wind Turbines of Curaçao 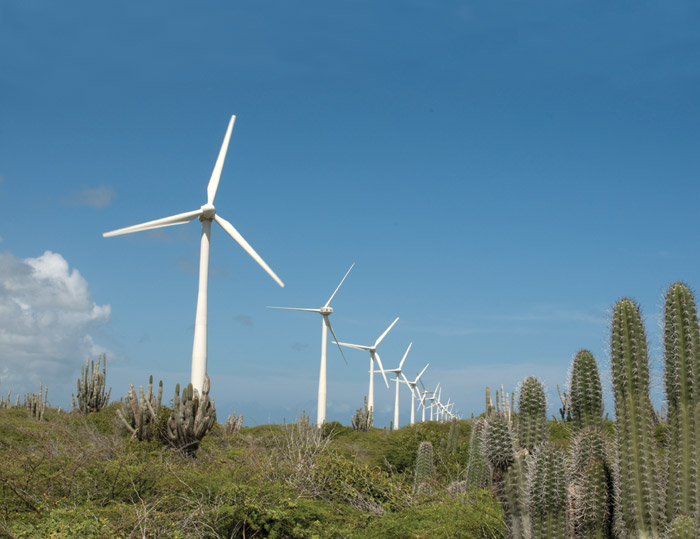 They’re the first thing many visitors to Curaçao see from their plane window as they approach the island: A row of tall white towers gleaming in the sun, stretching along the island’s rough north coast and pounding surf. These towers are two of the most successful wind-power plants in the Caribbean, and in terms of efficiency, anywhere in the world. 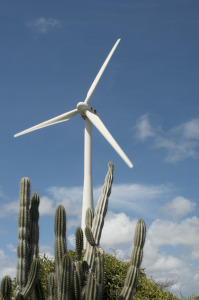 The Antilles are called the Windward Islands for a reason—and Curaçao takes full advantage of the fact. Windmills have been used for centuries to pump water on Curaçao and hundreds of them still irrigate orchards and provide water at remote sites but in recent years, Curaçao’s strong and steady breezes have been put to an entirely new use: generating electricity. Not only does this save the cost of expensive imported oil, it helps power the island while generating zero pollution or global warming. Commercial wind farms also generate electricity in Cuba, Guadeloupe, Jamaica and the Dominican Republic but Curaçao has more experience with wind generation than any other Caribbean island.

The Caribbean Islands may not have any oil, but they have plenty of wind which is free and never stops blowing.

Since coming online in 1993, Curaçao’s first wind farm, the 3-megawatt Tera Kora plant has been an unqualified success, performing well above expectations. It is considered the pioneer and standard bearer for all other Caribbean wind farm projects.

The Terra Kora wind farm consists of 12 250-kilowatt turbines and has been able to maintain a power penetration factor of 94% with a 38% capacity factor and few wind farms anywhere in the world can make the same claim. In fact this wind farm is the only one in the world operating as a baseload plant. Its site on the San Pedro plain is perfect for the purpose, with an average wind speed of 19.7 mph with little daily variation.

Encouraged by the success at Tera Kora, a second, nine-megawatt wind farm on the northeast side of the island at Playa Kanoa was built in 2001. This newer facility is the largest in the Caribbean and consists of 18 750-kilowatt turbines stretching for 3.5 kilometers.

Together, the Tera Kora and Playa Kanoa wind parks give Curaçao a total of installed wind-generating capacity of 12 megawatts and produce an average of 100 megawatts per day, enough for 6,000 households. They can cover 7% of the island’s average electricity demand, and up to 20% when demand is low.

Because Curaçao’s wind turbines are located on the rocky and beachless non-commercial north side of the island, with its dangerous waves and rip tides, few tourists venture there, but they make for an interesting day trip for the more adventurous tourist. You can drive right through the Playa Kanoa plant with any of several dune buggy tours. For a self-guided tour of the Tera Kora wind farm. 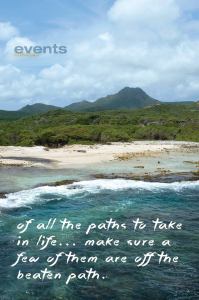 Turn right as you leave the airport.

Look to your immediate right for the “Free Zone Hato” sign.

Enter and turn left in about 50 meters onto a dirt road.

Four miles in you’ll see a ridge of impressive cliffs on your left.

0 minutes and 1.3 miles later, you’ll come to private property sign. You may enter freely, but you’ll need to pay 5 guilders or $3 to exit ahead.

After a total of 8.1 miles and 40 minutes of driving (without stopping) you will be at the gate to the San Pedro farm, where the road ends. Honk and a farmer will greet you at the gate. Pay 5 guilders, turn left and continue 1 mile to the main road.

At dead end, turn left to return to Willemstad or right to head to Westpunt.

* Wind turbines capture the wind’s energy with two or three propeller-like blades, mounted on a rotor and connected to a generator.

* The turbine blades sit atop high towers to take advantage of the stronger and less turbulent wind at 100 feet or more above ground.

* If you double the diameter of the blade circle, you generate four times as much power.

* Wind turbines generate electricity 70% to 85% of the time, but rarely at full output.

* Every unit of electricity generated from a wind turbine replaces one that would otherwise be generated from fossil fuels, and thus prevents the emission of such greenhouse gasses as carbon dioxide, sulfur dioxide and nitrous oxide.

* Technological advances in turbine and blade designs over the past 20 years have reduced the cost of producing electricity with wind by 80%.

Next post Architectural Tours: Walk the walk & hear the talk

Previous post The Curaçao Sea: A wide range of possibilities