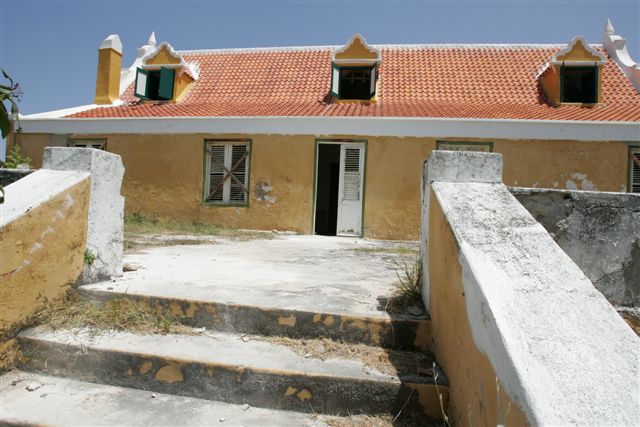 Grab the local road map (which shows most of the Landhuizen) and take an automobile adventure around this colorful island to discover these architectural gems. One cannot be less than thoroughly enthralled by the grandeur of these historic heritage houses.

Throughout this beautiful island lie dozens of scattered houses, uniquely built, varying in size and contrasting states of both remarkable renovation and eerie dilapidation. Dating back as far as the early 17th century to as late as the 19th century, these were the houses of the landowners, and formed the epicenter of their plantation/farms.

The Landhuizen (plantation houses) were built from coral with brick and stone details. Surrounding the main house were the slave huts and storage houses. They were situated mostly on hilltops so that lands, workers, and neighboring houses were within sight. Not to mention catching a cool breeze. The high saddle roofs built with Dutch tile were designed to serve the purpose of both catching and collecting much needed rain water.

Most of the slave houses that surrounded the property are long gone, but many of the Landhuizen are still standing and serve a vast array of functions. Brilliantly painted in a rainbow of bright hues and ornate in nature, these exquisitely renovated beauties now serve as private homes, boutique hotels, restaurants, rehabilitations centers, law offices, art galleries and museums.

For example, Landhuis Jan Thiel which is ideally located and has been renovated to beyond its original splendor in a five year project of passion by Dutch Lawyer Leo Spigt, has recently been converted into a spectacular heritage guesthouse run by his nephew/chef Boris Zwierink and wife Lieve. Even in short notice Boris can cook you up one of his magical mouthwatering Mediterranean meals to be served on their beautiful candlelit private terrace in a historical, luxurious environment that will take you a step back into Curaçao history.