Education in Otrabanda: An Historic Perspective 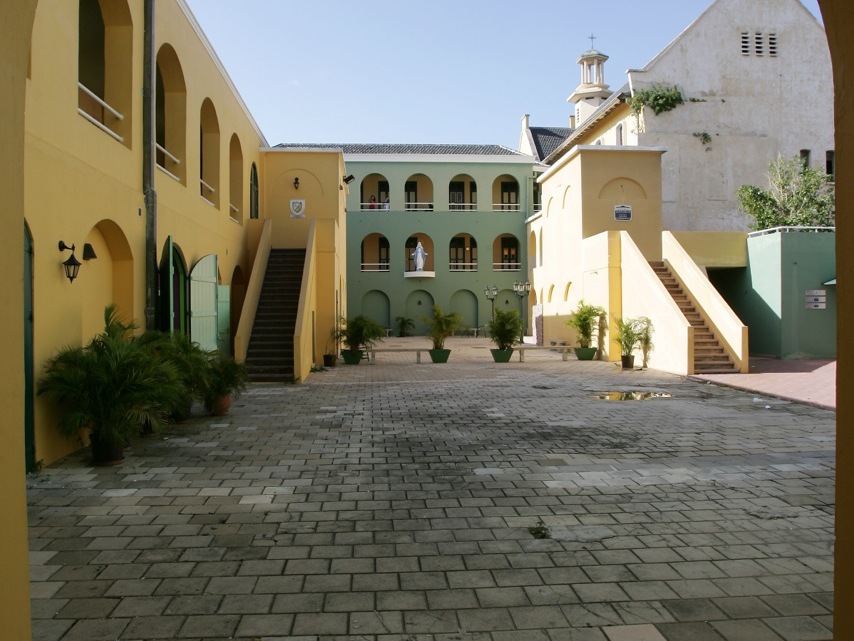 Education in Curaçao is the result of diligent missionary work that evolved with the times. The historic buildings St. Martinus complex at Brion Square (built in the 1870’s) and the St.Thomas building, (built in the 1890’s, situated next to the hospital in the main street) Today, are concrete landmarks of the history of education here.

As Bishop of Curaçao (1824 -1860), Mgr. Niewindt enlisted the local priests to attend to the religious needs of the predominantly colored population but realized that teaching the illiterate in the ways of the Church was an impossible task without the benefit of education.

There was no formalized education available until 1842 when the St. Franciscan nuns of Roosendaal arrived on the island. Soon after, in 1889 the Friars of Tilburg arrived bringing with them the work of educating the boys. Once in a while the colonial government would send a teacher from the mother country to help with the education of the children of the Dutch officials.

Hard-pressed for finances they began a boarding school for girls of middle and upper class background who could afford to pay the tuition fee making it possible for them to continue educating the poor and slave population which was their task in the first place. Two buildings in the narrow Conscientiesteeg (the oldest alley running parallel with the main street) served as the boarding school for girls from neighboring countries like Venezuela and Colombia.

Word of the nuns work spread and before long girls from well-to-do families from all over the Caribbean, central and northern parts of South America came.

Construction for bigger premises to handle the demand was an arduous process lasting over a decade but finally they were able to accommodate the demand for good Catholic education. Especially attractive was the multi-lingual education and the prevalence of Dutch law that guaranteed a politically stable environment.

Like the nuns, the Friars of Tilburg, had the same paternalistic attitude, this time with educating the boys. They were the first to devote themselves to the academic and vocational development of the largest segment of the population.

Both the friars and the nuns focused on two agendas: the higher education of middle class children, who would become future Catholic community leaders, and the systemized education focusing on lower vocational skills for working class children.

Following in the nuns’ footsteps, the friars also rose to fame with their St. Thomas College. They received many students from the region among them, the father of the 57th president of Venezuela (1984-1989), Jaime Lusinchi.

On its centenary celebration in 1942 letters of congratulations collected over the years were read. All scribed testimonials for overall excellent education, gratitude for their grasp of languages, the arts, music, and proper etiquette, some even extolled the virtues of strict discipline. Many married powerful and influential men: ministers, politicians and men of business, who have since visited the island as tourists and recommend the schooling system to others.

The adaptation to modern times was the result of the indefatigable work ethic of these educators until finally in the 1960’s the government slowly and necessarily began to step in. Through the instability of two world wars (and their enormous economic and demographic impact on the island community), the arrival of the oil refinery in 1917 and the breathless pace of modern technology, these pioneers of education rose to the occasion and their schools became excellent centers, managing to keep up with the changing times.

Over and above educating the children these congregations also set up orphans, neglected and abandoned children in special boarding schools and orphanages.

In spite of the paternalistic attitude of these missionaries, the seed they planted grew into full bloom. Excellent private schools flourished and eventually the government assisted in providing qualified teachers and professors who developed new ideas on modern didactics and methodology, a process that has been going on for the past two decades.

Today, the very first temples of learning, St. Martinus and St. Thomas are now universities. The University of the Netherlands Antilles (UNA) opened its doors in the St. Thomas building and the St. Martinus University resides in the complex that many years ago held the classrooms and boarding rooms for the girls. These universities are daily reminders of the missionary zeal of those early educators.

Parts of these buildings hold historic value and are architectural monuments of neo-classicism, with a strong Spanish influence in the arched courtyards.

Together with the International Caribbean University at the World Trade Center Curaçao has three universities and many private schools. Foreign students from neighboring countries flock to the island to pursue vocational and advanced education as well as languages.

Otrobanda shines brightly as a beacon of educational excellence and will continue as such in the 21st century.

Next post The Charming Plantation Houses (Landhuizen) of Curaçao