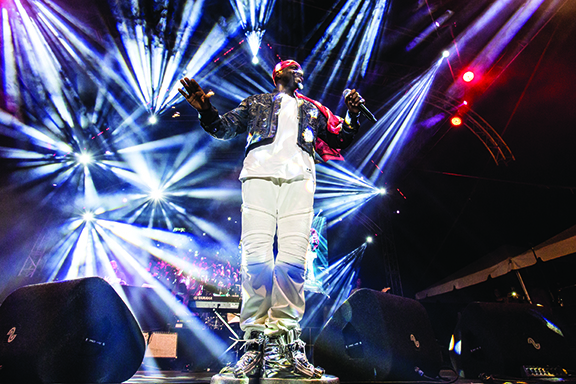 Wyclef Jean can be many things to many people and easily shifts from entertainer, musician, producer, social entrepreneur, politician, to wise educator. One thing that’s undeniable is his love for the people and the ability to relate to his fans. When Wyclef Jean visited Curaçao, Events Curaçao had an intimate chat with him at a WIFIng park in Oranjestraat, where he chilled with the locals and spoke about his many experiences.

After arriving on a motorbike, Wyclef got settled and immediately commanded the attention as an animated storyteller. He swept us up with fantastic tales about his childhood in Haiti and made us appreciate how far the singer has come. He also gave an impromptu acoustic performance, where he sang his hits like ‘Gone to November’ and ‘Hips don’t lie”. This was a simplified version of the energetic performance he was about to give at the Curaçao North Sea Jazz.

After an illustrious two-decade career in Hip Hop, where he sold millions of records and won three Grammy’s with the Fugees, Wyclef decided in 2010 to run for the presidency of Haiti. “I ran because of the urgency and rose to the occasion because my country recognized me as a leader. When the earthquake went down, I made myself available” he explained. His presidential race was peppered with controversy, and according to Wyclef also a lot of propaganda to discredit him. “They said that I wasn’t born in Haiti, even though I lived there until the age of ten. They also said that I couldn’t speak Creole, although it’s my first language and that I wouldn’t give up my American citizenship to run”, he said.

So where did these wild tales come from, we asked?

“I assume that the same place that the wild tales about Mandela and Martin Luther King came from.  At the end of the day, history has a way if finding the truth, because you can’t hide the truth and I just exposed the lies”, he explained. “In hind side, I think this is what I was supposed to do. Bob Marley never became president, but he influenced politics”, he shared.

Another sensitive subject that deeply affected the singer was the scandal surrounding Yele Haiti. Founded by Wyclef in 2004, the singer was accused of gross mismanagement of the funds of Yele Haiti. According to the New York Times, instead of using the money to help the millions of displaced Haitians affected by the earthquake, Yele Haiti used the funds to pay for offices, salaries, consultants’ fees and travel expenses, amongst others. “I wanted to say on the record, I feel that my foundation was infiltrated by the government”, Wyclef stated. “In five minutes I was able to generate a million dollars. After that, I knew I was going to be in trouble with people that were used to making their money through charitable organizations”, he explained. Wyclef was especially hurt by the fact that his supporters didn’t defend him during that period. “I was born for this purpose, so I didn’t expect anything from them, but as a human, I was hurt, but then I rose past the hurt”, he continued. Instead Wyclef opted to adjust his mission by working with organizations and different governments to stimulate the private sector so it can meet social responsibility.

After supporting and getting president Martelly into power, Wyclef took a break from politics and started to work on his next album, which he hopes to release its first single by the end of 2015.

“I hope to release the album early 2016 and it’s going to crazy, because it will feature Emily Sandé, Drake, and many more”, he shared. “I’m also working with a lot of DJs like Afrojack and DJ Khaled”, he teased.

As we finalized our conversation and jumped on our motorbikes to hit the Curaçao roads, there was a glimpse of a pensive and elusive Wyclef. After a delightful day chilling with the locals and driving around Curaçao, Wyclef retreated to his hotel so he could prepare for what would be one of the most amazing performances of the 2015 Curaçao North Sea Jazz. He rocked the crowd with his pulsating rhythms and eclectic tunes and displayed a high-level showmanship that was amped the intoxicating Caribbean energy.  “All I want, is to be remembered as a man that brought people together, and when he showed up there was no such thing as color or language  barrier”, he explained earlier during the day. “All I’m trying to do is to get the people to feel more of a harmony and less of a separation”, he finalized.