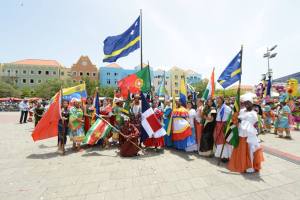 In Curaçao, you’ll often hear: “Bon Bini!” – This is Papiamentu for “Welcome!”

Papiamentu derived about two-thirds of its words from Iberian languages (Spanish, Portuguese, and Galician), a quarter from Dutch, and the rest from other languages including English, French, and various African languages. This creole language is being spoken north of Venezuela on Aruba, Curaçao and Bonaire, islands of the leeward Netherlands Antilles.

The name Papiamentu comes from the word papia which means speak. Papia is the Papiamentu verb for ‘to speak’ and -mentu is the suffix that forms a noun, meaning approximately ‘the act of doing something’. Papiamentu translated would then be something like ‘Speaking’ or ‘the way of speaking’. Visit: www.papiamentu.net for more info and words to use while you are on the island!

Here are a few words for you to practise and use while visiting:

Kon ta bai?
How are you?

Mi ta bon
I am fine

Kuantor Tin?
What time is it?

Kwantu esaki ta kosta?
How much does this cost?