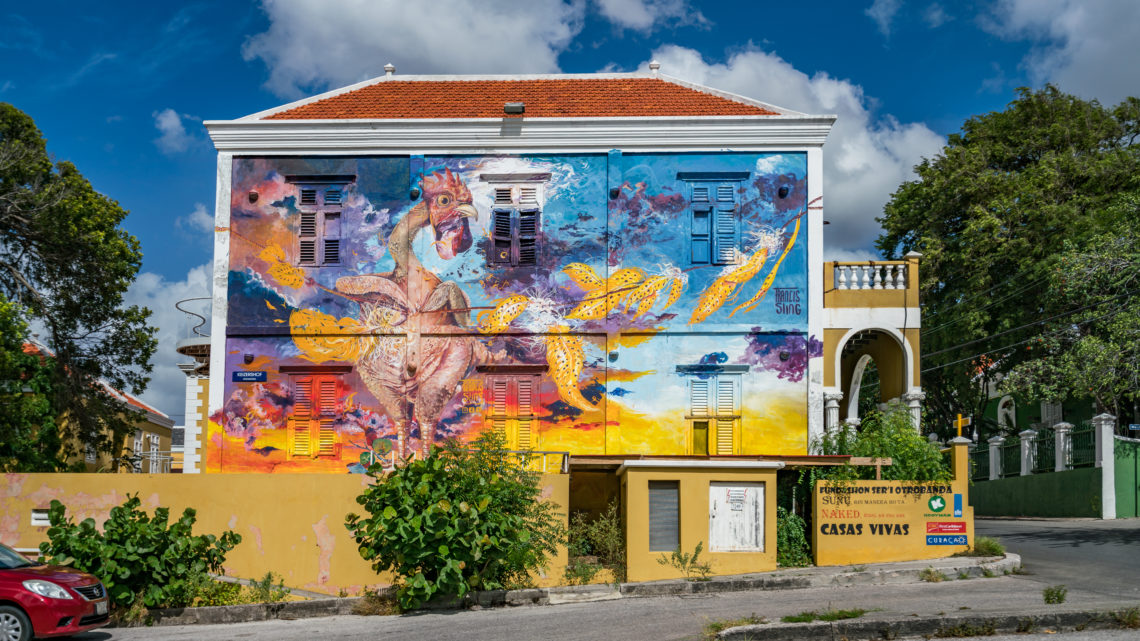 One notable resident of Curaçao is painter and artist Francis Sling, age 39, who has been creating quite a buzz around his murals and paintings. Especially the 3 o’clock Romance, the impressive yellow and blue mural at the corner of Bitterstraat, has become a must see during the city tour. Sling’s work is also gaining international recognition, as he is nominated for a Street Arts Awards Benelux for his ‘Sunú’ mural in Otrobanda, selected from more than 600 artists.

Occasionally, Sling also moonlights as a graphic designer, but explains that art has become his true outlet of self-expression. Sling’s work is very vibrant, yet has some melodrama to it, but is definitely more than just a pretty picture. The product is a captivating use of acrylics on canvas or wood. When Sling works on wood, he carves unique frames that perfectly contour and  blend with his artwork, and with every dynamic or gentle paint stroke he applies to his canvas, he loves to capture the essence and emotion of his subject or model. With his transparency and honesty, Sling’s art becomes real and often emotes what we cannot verbalize or express ourselves.

Sling shared with Events Curaçao that he aspires to be even more creative and hopes, one day, to write theater productions. In the near future, Sling plans to build another atelier in his childhood neighborhood, together with his brother and artist Omar Sling. He also wants to continue to organize painting workshops, which he hosts several times a year. When you visit Sling at his atelier, you can admire many colorful pieces hanging on the walls and even purchase one of his impressive ready-to-wear jewelry pieces made from leftover paint peeled off his painting palette or pick up a block of art from the heart to take back home with you!

Due to the popularity of the Bitterstraat mural, Monumentenzorg – the nonprofit that manages the reconstruction of monuments in Curaçao – noticed Sling’s work and approached him to consider Scharloo as a new abode. Sling moved into the newly renovated home, which he plans to transform into a studio and coffee house that he hopes to open before the end of 2018.