The man behind the vision 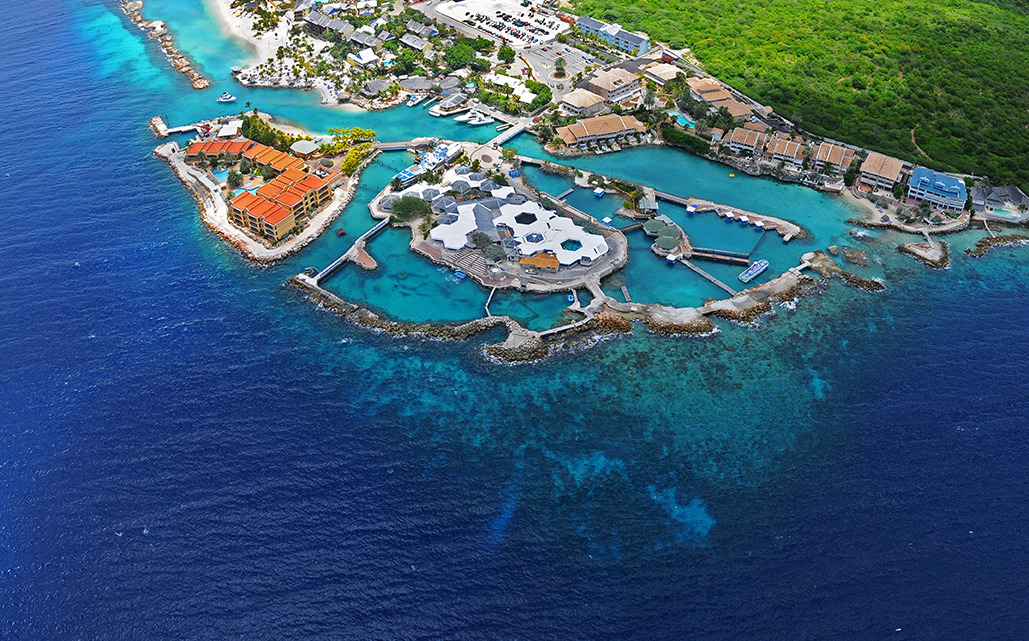 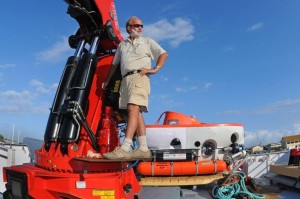 The Research Vessel and submarine tender RV Chapman is preparing to leave the harbor of Willemstad on February 19th, setting out for the island of Dominica in an estimated three day journey.

A total of 17 crew members and passengers will be on board the Chapman that carries the Curasub , the 5 person submersible operated by Substation Curacao. (Read below for  more information about the Curasub and the Chapman)

Marine scientist have been conducting several awesome operations with the participation of the Curacao Sea Aquarium and director Adrian “Dutch” Schrier for a few  years. The passion for discovery is driving the team to explore more deep reefs alive with new species, possible archeological artifacts and old shipwrecks off the northwest coast of Dominica.

The opportunity to go as deep as 1000 feet with the Curasub is very exciting for the large group of marine scientists, STIMACUR, the foundation for Marine Archaeology Curaçao, that have teamed up with Substation Curacao.

The  Smithsonian National Museum of Natural History  will also be joining the team of researchers in Dominica aboard the Chapman. They are expected to Dominica mid-March to continue research with the findings. The entire expedition will be documented since Dutch ensured that a state-of-the-art audio visual system was integrated on board the ship, enabling the crew to view the days work and edit material, hence creating a documentary.

Subsequently, Dominica dignitaries have expressed how delighted they are to welcome the Chapman, the Curasub and all their crew members. 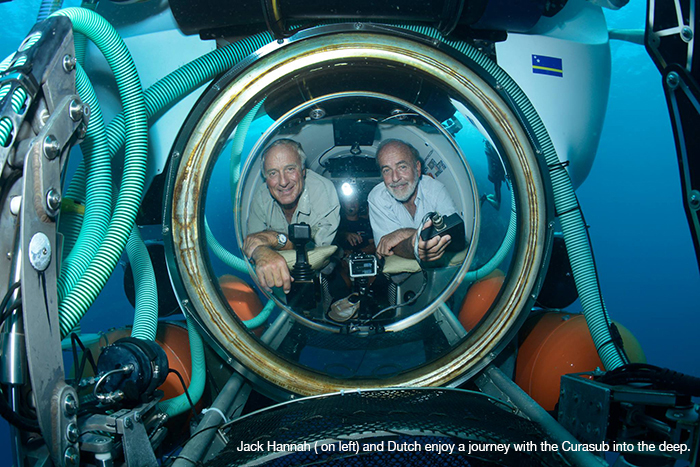 Born as Adrian Schrier but most people simply call him Dutch.

He chose to go by this nickname due to his love for Curaçao. In the early 80s, Dutch’s influence in Curaçao started to shape the touristic landscape in more ways than one.

Dutch had a vision that started to germinate during one of the most difficult periods in his life that actually motivated him to redefine his master plan. He planted the seed that withstood the test of time, surrounded by a handful of key people who backed up his dream and believed in his vision. They especially played an important role in the development of a project that was going to change the face of tourism in Curaçao.

Dutch greeted me in his office within a massive minesweeper ship called “The Woerden” that he bought from a Dutch navy in the early 90’s. This vessel stands prominently out of the water at the entrance of the Sea Aquarium Park. While we chatted, he enthusiastically rolled out the preliminary architectural plans he made in the 80’s, and then laid out an aerial view of what the South-East area called Bapor Kibra used to look like versus what it is now, a unique vacation destination. 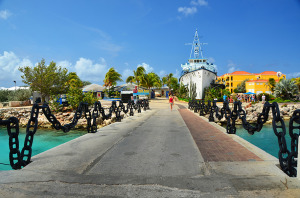 The Seaquarium Beach, where the Mambo Beach and the Curaçao Sea Aquarium Park join, is one of Curaçao’s primary tourist attractions and visited beach today.

Back in 1984, The Curacao Sea Aquarium Park consisted of a hexagon-shaped dwelling for several small to medium sized aquariums showcasing the marine life found in the Caribbean Sea. Within kilometers’ range there was nothing else to see but endless waves crashing against rocky shorelines as far as the eye could see. Back then, the area was deserted, and if you were lucky enough to see the printed advertisement that showcased the Curaçao Sea Aquarium Park, you’d know where to visit. In 1986, builders began converting the shore into a beautiful beach strip, thanks to the construction of a beach break that barred the strong current from entering the beach. This transformed the area into a gentler stream and sparkling  blue shoreline, which became one of the most visited beaches on the island today.
A couple hotels located at the Seaquarium Beach are welcoming guests since 1987.

During the expansion of the aquarium, breaking points and divisions were also created to allow water to surround the premises. Dutch was ready to bring in more marine life and mammals such as seaturtles, stingrays and sharks. Within a short timeframe, a natural lagoon environment was created for bottlenose dolphins from the coastal shore of South America, who entertain tourist in a designated area and tend to children with special needs at CDTC in another. (Curaçao Dolphin Therapy Centre)

Aside from creating opportunity for locals and developing the Curaçao tourism sector, Dutch also opened the hearts and minds of a younger generation, who visit the Curacao Sea Aquarium Park to this day to learn about the Caribbean marine life, which has quadrupled in size since then.

Dutch always motivates his colleagues and employees to strive for their highest potential and to never stop dreaming, even if it means going under. And that’s exactly what happened in 2011, when a miniature sub called the Curasub was acquired by Dutch and transported people as deep as 1000 feet below the surface! 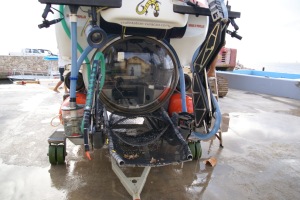 The Curasub not only meets but exceeds the highest safety standards and takes a maximum of four passengers to unreachable depths for divers, and to places very few people have ever been. The Curasub was designed by Nuytco Research Ltd. of Canada, and is a one-of-a-kind deep-diving tourist and research submarine, which is run by Substation Curaçao situated just steps away from the Sea Aquarium Park. The sub is equipped with scanning sonar, two mechanical arms and a custom-made sampling basket. It is a perfect vehicle for scientific marine research, observation, fish collecting and the collection of other marine specimens. Thanks to its technical advantages, the mini-sub has attracted the attention of renowned international scientific institutes, oceanographic research institutes and several distinguished scientists.
The marine organisms that the Curasub is bringing up from the under-explored deep reefs are organisms that the pharmaceutical industry is investigating to determine whether they could be instrumental in the production of medicinal cures. In 2012 a Deep Reef Observation Project (DROP) conducted by Smithsonian scientists collected many specimens with the help of the Curasub. Prospective new species were caught on almost every dive as the scientists explored the biodiversity of the mid- and deep-sea ecosystems.

Back in 2008, the RV Chapman was purchased by Substation Curaçao and was launched as the NOAA-ship (National Oceanic and Atmospheric Administration). The 127-foot long research vessel served for 25 years exploring the Bering Sea and ended up in Puerto Rico. For almost six years professors and researchers participated in all kinds of marine research and then abandoned the vessel. Dutch consequently purchased it and gave it new life from the inside and out. The vessel was redesigned and fitted with a crane capable of launching and retrieving the mini-sub. To this day it serves as an ongoing research vessel for researchers and adventure-seeking travellers.

Strong determined action. Getting key players to believe in his dream and back him in developing a project the scope of which no timid person would undertake – this is what Dutch has done for the island.

Next post Special Friends at the Curaçao Sea Aquarium Park