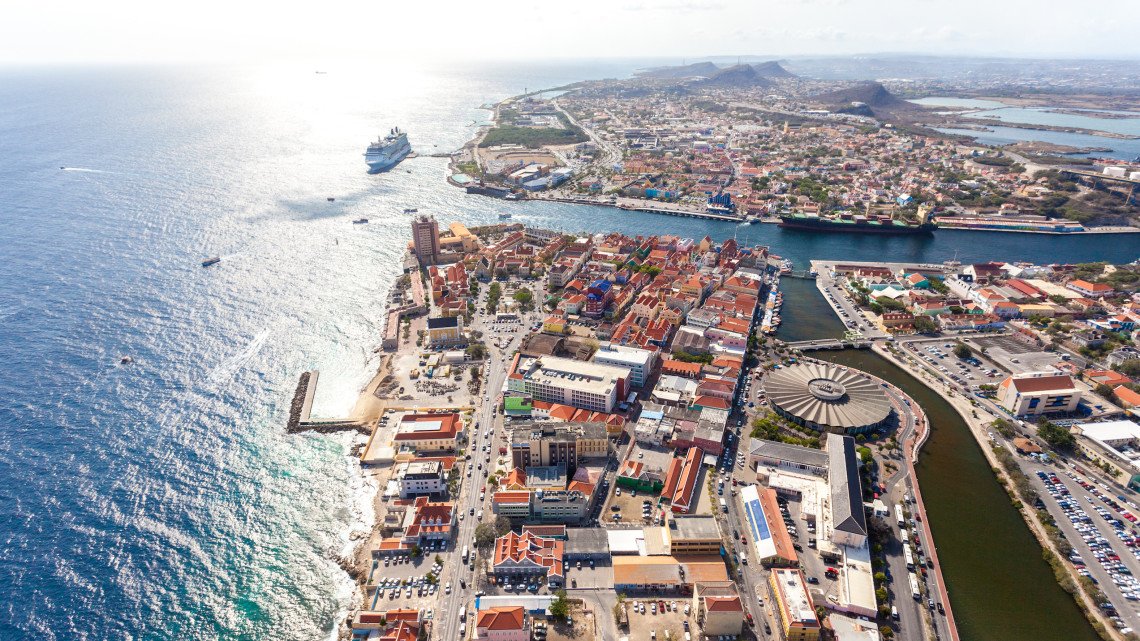 I am greeted by a Chief pilot at the Heli headquarters located in Otrobanda. The map of Dushi Curaçao is on the wall, and he points out to different options of trajectory asking me to choose a preferred tour. I was familiar with the road to Westpunt by car so I opted for that direction towards the northern tip of the island.

To ensure my comfort and safety, there are a few simple guidelines to follow: adjust a safety belt with an inflatable vest worn around my waist, wait for the signal before approaching the heli and stay low! Good idea. The handsome pilot hops into the cockpit, fastens up, turns on the engine, pops a switch and the rotor blades start to spin at an impressive speed – now we wait for his signal to approach. Thumbs up, we are ready to go!

As a first timer entering a heli, I had the instinct to crouch down, but in fact, all I had to do was walk towards it tilting my head. I did not look like one of the Charlie’s Angels getting in!

I sit up front next to the pilot who in turn hands me an aviation headset to reduce the noise and to comfortably communicate in flight. The high pitched sound of the engine and blades cutting through the air makes me feel adrenalized. I’m so ready to go that I’m smiling from ear to ear and enjoying every second of the prep before lift off. The lovely assistant and photographer joins us walking in, tilting her head (looking like one of the Charlie’s Angels) and sits behind the pilot. There are two more seats available but it’s only us. A few messages are exchanged between my co-pilot and the air traffic control guard. All systems go, we are clear for lift-off!

As the blades spin, it forces air over its curved upper surface and then throws it down behind it toward the ground, producing an upward force called lift. The pilot increases the pitch with a control called the collective pitch stick. This makes the helicopter rise upward and hover. The sensation of lift-off is such a rush as we soar above the Juliana Bridge and glide towards the pontoon bridge. This “Swinging Old Lady” is in action as it makes way for a boat sailing through. The beauty of this all-scenic flight is that I also see the colorful center of Willemstad and the St Anna Bay dividing Punda and Otrobanda. The island shimmers with vibrant colors and textures down the coast line as far as my eyes can see, and its remarkable how quickly I forget my fear and seek more sensation then ever! 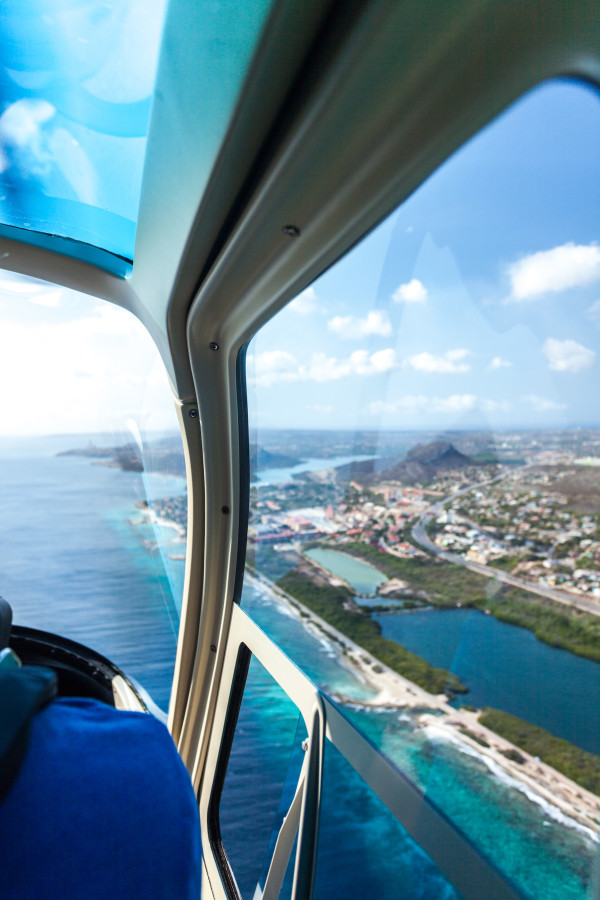 My trusted pilot tilts the helicopter making a slight turn towards the North along the east coast and we leave Punda and Otrobanda behind us heading for the greener side of the island. There in the distance I can already see more mountainous regions and the highest summit of the island, St. Christoffel Peak. Along the way I recognize many places as we fly by Piscadera Bay, but seen from above I second guess myself. I’m enthralled looking at the spectacular view in all directions and feeling quite amused looking at a small fishing boat in between my feet through a clear acrylic floor revealing the sparkling turquoise sea beneath us.

We soar up to 500 feet above the rooftops and descend as close as possible to the waterline and terrain to feel the rush. We see the splendor of the coasts’ inlets and bokas, unpaved winding roads and the mountainous side dotted with resorts, landhuizens, villages and private villas that paint an awe-inspiring landscape where roads less traveled are the ones that take you there. Dashes of colors come into contrast with the textured earthy tones of nature along the blue coastline dotted with white sandy beaches and trails into the mainland where a cluster of rolling hills and mountains give rise to the Christoffel National Park.

We approach the Northern West tip of the island, and there’s only one slight curve to take to fly over to the other side of the rugged Northern coast of Curaçao.

It’s exhilarating to stand at the edge of a cliff watching the waves crash against the rocky coastline at the Shete Boca Park but it is also a rush from this perspective, witnessing the swell and impact all the way down the coast. We hover here and there for a few minutes feeling the thud of the ocean and then continue our trajectory along-side the giant wind turbines spinning in one direction as we spin in another. The pilot receives a signal from the air traffic control at Hato Airport that a flight is taking off, we are very close to the landing field, so we wait in mid-air for clearance and see the take-off.

We have been flying for nearly an hour and it’s time to head back to the headquarters. However, just before pointing ourselves there, Stephan takes us to the Curaçao Cruise Port Terminal in Otrobanda to blow me away with a very surreal perspective of a gigantic cruise ship leaving the port with hundreds of people on deck and balconies. We were waving at each other. This unique angle was like a scene out of the movies!

During flight I express my enthrallment, and it’s great to hear the same excitement reciprocated by a crew that flies here on a regular basis. Without a doubt, they love what they do but I hope I didn’t blow out their eardrums squealing with enthusiasm! What an uplifting experience and I’m so impressed with the precision and handling of this aircraft!  I look forward to another helicopter ride soon!

Next post Jeep Safari to the summit of Mount. Christoffel