Mystery of the Calabash 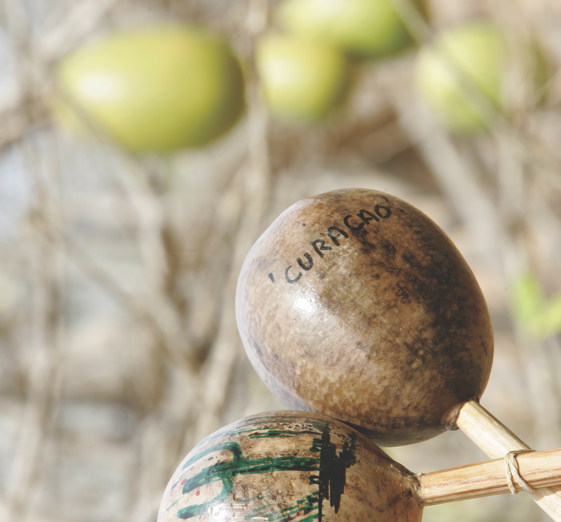 Look around the luscious greenery of Curaçao’s plantations and your eyes are  bound to land on a Calabash tree.  Usually not more than 25 feet tall, this multiple trunk,  branch-twisting tree has beautiful light green elliptical leaves.  It blooms in the tropics from May to January, revealing stunning large bell-shaped flowers, of green and yellow hues, with purple accents.  These showy flowers grow, unlike with most trees that we know, directly on the branches or trunk of the tree.  They seem to say “look at me, I’m beautiful.”

Also found on this tree is one of Curacao’s best-kept tropical secrets: The Calabash Fruit.  But if you’re thinking you might have eaten a slice of Calabash this morning at the resort’s breakfast buffet, you are greatly mistaken.  No, the Calabash fruit, which can take an extraordinary 7 months to ripen, is not eaten by locals; rather, it is regarded by most islanders as a mystical treasure not to be underestimated.

The Calabash tree itself is of great utility.  Its fibers can be twisted into twine and ropes, and its hard wood made into tools and tool handles. The split wood can be woven for sturdy baskets.

The Calabash fruit is a completely sealed and self-contained sphere, usually about 10 inches in diameter.  Its shell is so hard that it cannot be pealed off and must be cracked open.  The inside of the fruit is made up of tiny black seeds, and the fruit has no edible flesh.

One of the first cultivated plants in the world, the most obvious use of the Calabash is as a container. By emptying and hollowing out the seeds, the dried casing serves as a large bowl.  Smaller sizes can serve as bowls to drink palm-wine.  In Mexico, they are used as canteens to carry water.  In parts of South America, Calabash gourds are dried and carved into mates, the traditional container for the popular caffeinated tealike drink brewed from the yerba mate plant.

The Calabash is also found in parts of Africa, where its varied uses are also notable.  For example, in Nigeria, the hollowed fruit is used as a flotation device and to store caught fish during the annual fishing Festival.

The seeds of the Calabash are edible and high in protein with a licorice-like sweet taste.  They can be toasted and ground with other ingredients (including rice, cinnamon, and allspice) to make the popular South-American drink called horchata. Calabash is known locally as morro or jícaro. : check with Omer for local nameIn other cultures, the Calabash is used as a musical instrument, ranging from lutes to fiddles and rattles. Sometimes, large calabashes are simply hollowed, dried and used as percussion instruments such as maracas.

In Curaçao, some locals have chosen to make the Calabash their inspiration for dramatic pieces of ornamental art.  Bente Kooreman is an artist on the island who specializes in using Calabash shells to design boxes, lamps, wind-chimes, as well as jewellery.  Born in the Netherlands in 1964, she studied fashion and moved to Curaçao in 1999.

Beneath the hard-shell exterior of the Calabash lies untold tales of historical and mystical dimensions.  Historically, we can trace the fruit back to the days of the Mayan civilization, when the fruit served as a warrior’s tool to cover the heads of hunters. The fruit also played an important role in the book of myths of the Mayan culture.  Legend has it that two famous twin warriers were killed in a ball game and then had their skulls hung in the Calabash tree by the demonic Xibalban army.  Some blame this myth for the resemblance of the fruit to skulls.

The Calabash has valuable medicinal uses.  The effects of Suriname’s traditional medicine, which carries centuries of indigenous knowledge from the great Amazon forest, are widespread in the Dutch Antilles. Calabash joins over 1,000 of other natural fruits and herbs in the Amazon to provide natural healing and cures to common ailments.  In particular, the fruit pulp of the Calabash is used for respiratory problems such as asthma. Also, fruit decoctions can be taken orally to treat diarrhea, stomach ache, colds, bronchitis, cough, asthma, and urethritis. The leaves of the Calabash are used to treat hypertension.

So now that you have learned so much about the Calabash fruit, let’s see if you can solve a riddle:  What do the Calabash fruit and Sherlock Holmes have in common?  Hint: The young Sherlock carried a piece of Curaçao in his mouth everywhere he went.

ANSWER:  Sherlock Holmes’ famous pipe with the curved stem was made from the Calabash.  Brilliant deduction, Watson!

Next post The ABC’s of Aruba, Bonaire and Curaçao