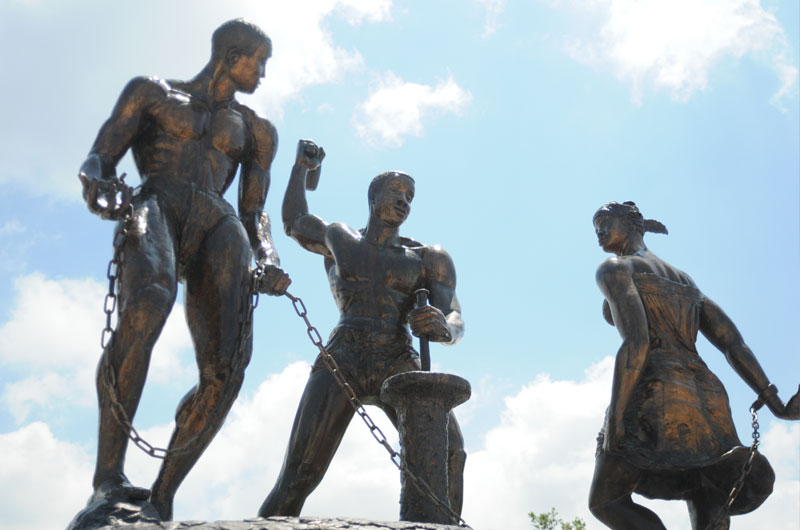 It is an island’s history that breathes spirit into the future of its people and in Curaçao the people’s history is deeply rooted to the legends of their past. This is the story of two men who rose up and influenced the course of history; the white man Luis Brión, son of Dutch merchant Pedro and his wife Maria Detrox, and the black man Tula who led the slave revolt in 1795.

Luis Brión…merchant, prisoner, revolutionary
Luis Brión was born in Curaçao on July 6, 1782. In 1794 he went to Holland for his education. He joined the armed forces there to combat the British invasion of Holland. When Holland recovered control over Curaçao he returned to the island, devoted to trade and taking part in an insurrection movement of revolutionary character. Brión led several actions to prevent the English from recapturing Curaçao from 1803 to 1806.

In 1807 Brión was exiled to the island of Saint Thomas, then a Danish colony. Eventually, he fled to the United States of America where he studied nautical sciences and Maritime trade.

In 1813 Brión joined the cause of the independence of Venezuela and accepted the Venezuelan nationality. Later, in a meeting with Bolívar he became captain of warships and carried out expeditions on the coast of Venezuela. On May 2nd 1816, Brión won his first of several victories over Spanish battleships in the naval battle of Los Frailes and on the same day Bolívar appointed him admiral of the Republic.

Through his staunch support of the struggle for democracy and human rights, Luis Brión’s influence changed the course of Curaçao’s history. Unfortunately, at war’s end Luis Brión was afflicted with tuberculosis. He returned to his native island where he died the day after his arrival. On April 1882 his remains were transferred to the Nation Pantheon of Venezuela.

In 1795, Tula was one of almost 5,000 Bandabou inhabitants, almost all of whom were slaves. On August 17 Tula led an uprising of 40 to 50 slaves that was to be the beginning of a longstanding fight for freedom. They went to Lagun and freed 22 slaves from jail. From there, the rebels moved on to the sugar plantation of Saint Kruis, where they were joined by more rebels under Bastian Karpata. Tula and his escaped slaves went from farm to farm, freeing more and more slaves.

Slave owners began to retreat to the city, leaving their plantations unprotected. At this time, Louis Mercier, a confederate French slave left Tula to lead another group of freed slaves to Saint Kruis. He abducted commandant Van der Grijp and ten mulatto prisoners and then rejoined Tula, locating him by following the trail of destruction Tula had left behind.

Dutch slave owner Sabel, became the first white victim of the rebellion at the plantation of Fontein and at this point, the governor considered the revolt a serious threat. Under the command of Lieutenant R.G. Plegher sixty-seven white and black men were sent to defend the colony against the rebels but were defeated by Tula’s group.

Among the group was Jacobus Schink, a Franciscan priest who served as negotiator and attempted to prevent bloodshed to whom Tula declared “We do not want anything else than our freedom.” Tula made three demands; an end to collective punishment, an end to labor on Sunday and the freedom to buy clothes and good from others than their own masters. There were two failed attempts at negotiating with the slaves. Father Schink reported back with Tula’s demands and orders were immediately given to shoot any rebel with a weapon. In the ensuing fight, the rebels were defeated. Ten to twenty of them were killed, and the rest escaped.

The rebels began a guerrilla campaign, poisoning wells and stealing food. On September 19, Tula was betrayed by a slave, he was taken prisoner and the war was effectively over. Tula was publicly tortured to death on October 3 1795 almost seven weeks after the revolt began. Many years later the Curaçao government formulated rules that defined the rights of slaves on the island.

August 17 is still celebrated in Curaçao to commemorate the beginning of a long fight for freedom. When slavery was abolished on the island in 1863, there were fewer than 7,000 slaves.