Fast Forward Phases of the Curaçao Ports of Authority

Cruise Ship in dock at Otrobanda - photo by Gail Johnson

The CPA main aim is to make the inner harbor more accessible to the public by creating an interconnected harbor, surrounded by pedestrian paths and parks. Another objective is to continue the promotion of Willemstad as a commercial center and increase residential population downtown.

Most importantly, CPA wants to continue to support commerce, by encouraging more frequent and extended visits by locals, tourists and cruise passengers.

Curaçao enjoys numerous saltwater bays that spawn a variety of marine life and harbor picturesque beaches. The most intricate of them is the St. Anna Bay, a deep waterway that parts the capital Willemstad in two. Particularly notable is the 1.6 kilometers and 90 to 300 meters wide narrow channel that opens into the Caribbean Sea. At the north end of the channel lays the Schottegat, a deep lagoon that serves as a harbor, maritime dock and the refinery. Connecting the two sides of Willemstad is the historic pontoon bridge, Queen Emma, which was built in 1888. Additionally connecting the two sides is the Juliana Bridge, which tips at 56.4 meters. The waters of St. Anna Bay and Waaigat divide Willemstad in four historic districts, which consist of Punda, Otrobanda, Pietermaai and Scharloo, and have transformed Curaçao into a historic port in the Caribbean.

Fast forward to 1997 when the historic area of Willemstad inner city and harbor is added to the World Heritage list. Since then Willemstad has seen many changes, however with its sights set to the future it needs to reinvent itself. And the Curaçao Ports Authority, better known as the CPA, is committed to see Willemstad retain its former splendor by investing and upgrading all of Curaçao’s ports with a very ambitious master plan. Founded in 1981, CPA owns the container and cruise terminal, most of the wharves and properties adjacent to the harbor, which are leased to private operators. Moreover, CPA is responsible for commercial development of the ports and for overseas promotion. In cooperation with KTK Tugs and Curaçao Pilots Organization, it is responsible for ensuring safety and security, access coordination of vessels, port maintenance and development and the management of the Emma Bridge and ferries.

In 2015, the CPA launched a master plan for the revitalization and upgrading of the inner harbor of St. Anna Bay, specifically the four areas under the CPA administration. The 16 hectares of shoreline and underwater lands include Scharloo and wharfs, Mathey Wharf, the Waaigat lagoon and properties immediately north of the Queen Juliana Bridge. After discussing the future of Willemstad with every major stakeholder, CPA ambitiously seeks to turn the waterfront of the Anna Bay into a moneymaker for Curaҫao. According to their 15-year masterplan, CPA is confident that these upgrades will empower the surrounding neighborhoods, lift prospects for renewal and redevelopment and transfer value to surrounding sites. These renewals should also aim to highlight the uniqueness of each neighborhood and encourage both residents and tourists to explore, connect and learn about Curaçao, while preserving and protecting its integrity, in particular the UNESCO World Heritage district.

CPA estimates that the economic impact of the redevelopment of St. Anna Bay will be significant. Over the course of construction, the one-time employment impact is expected to be over 1,600 jobs, and nearly 2,200 secondary positions, with estimated annualized wages of approximately 93 million USD. Although the full realization of the vision for St. Anna Bay is long-term, with each investment and development, the foundation for the next phase is achieved and Willemstad can truly claim its rightful place as a pearl in the Caribbean. 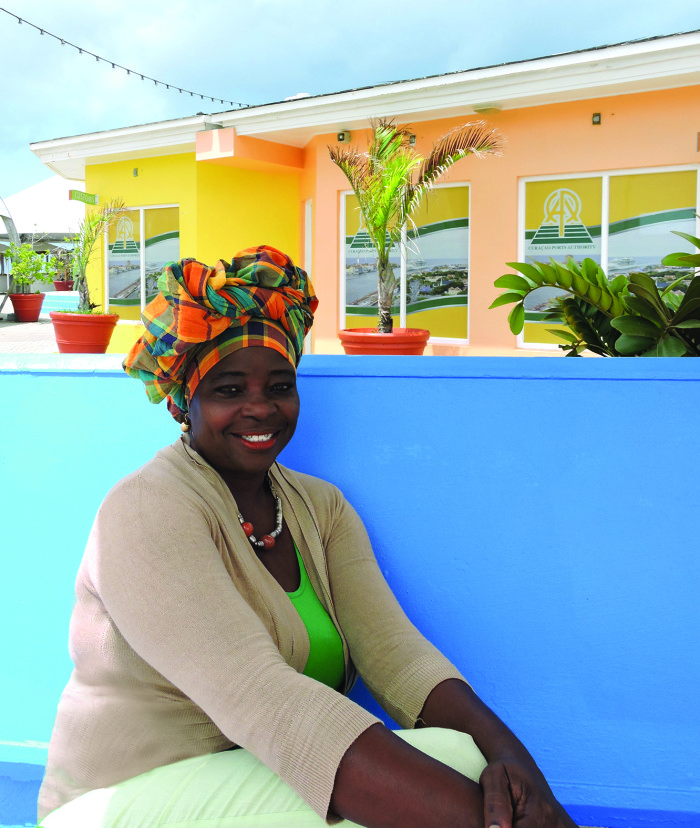 When cruise tourists arrive at Curaçao’s Mega pier, they are welcomed by the warmest and most colorful lady in town, the legendary Elia Isenia. At the port, the famed singer, poet and historian, together with her energetic team, put on a show to give the visitors a unique taste of Curaçao. “My job is to welcome them and allow them to feel our warmth and flavor”, she explains. “I allow them to participate and experience something different, and soon they start feeling at home”. Elia also gives the tourists a keepsake that will hopefully prompt them to return to our island. “At other ports, they have to pay for everything, so I hope we can keep that tradition going”, she continues. CPA doesn’t provide tours however they do work with several reputable tour operators, who take the visitors to the many historical and touristic dwellings on our island.

The Caribbean cruise high season starts late June to August, and then continues during the Christmas and New Year’s holiday weeks, to pick up again during February and April. Curaçao is gaining popularity as a cruise destination and according to Elia, during the high season there are ships almost every day of the week. Each ship can carry between four to five thousand people, so that totals approximately fifteen thousand visitors.

Elia has been a port greeter for more than two years, and since she’s such a lover of people, the job fits her perfectly. “Never before have I had the opportunity to promote my culture to foreigners, and it’s a beautiful thing that fills me with joy”.

For the Curaçao cruise tourism to grow, Elia believes we need to accept and grow with change. “With the addition of the second mega pier, we need more qualified people to do this job”, she explains. “Once it penetrated my being, I knew precisely what to do with the tourists to make them feel welcome”, she explains. “Now we need to invest in the youth, so they can also continue the work”, she finalizes.