Discover the Magic that lies below the waterline 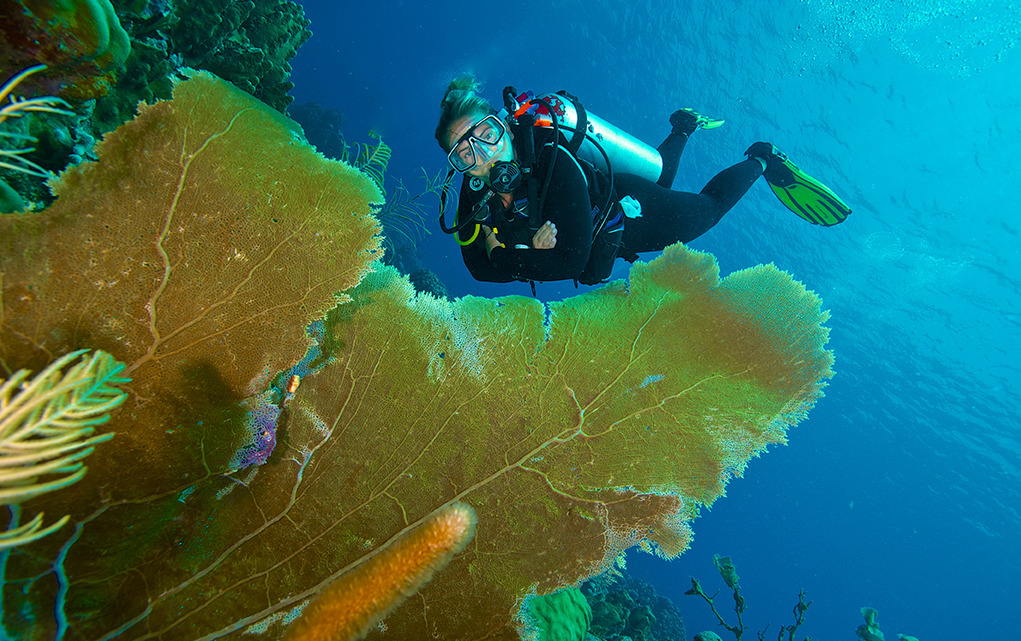 It never gets old. Though I’ve been diving almost daily in these waters for eight years now, it’s never the same scene twice. And I never know what I might run into! A whale shark, spinner dolphins, a giant ray, sea turtles, even a humpback whale have all wandered into my path below. That’s the beauty of diving around Curaçao: it’s natural diversity. Healthy coral reefs are attracting all kinds of marine life visitors, and hopefully more human visitors now, too. Curaçao is surrounded by more than 104 sq. km (40 sq. miles) of some of the best coral reefs in the Caribbean, but has still remained off radar for most diving enthusiasts. We hope to change that!

Curaçao, is the largest island in the Dutch Caribbean (formerly known as the Dutch Antilles which included Curaçao, Bonaire, St. Maarten, Saba and St. Eustatius). Today, Curaçao is an independent country within the Dutch Kingdom. It is 61 km (38 miles) long and between 5-14 kms (3-9 miles) across. It is located in the southern Caribbean approximately 60 km (37 miles) north of Venezuela next to Bonaire and Aruba. The coral reefs are normally found 18-300 meters (65 to 1,000 feet) from shore where they start at a depth of approximately 10 meters (30 feet) and then gently slope down to a depth of over 100 meters (300 feet) in some places.

In addition to the amazing fringing reef system, large inland bays can be found around the island in which mangroves and seagrass communities thrive and serve as nursery areas for certain types of reef fish that are less abundant on similar islands that have no inland bays. While living coral reefs are still growing around the island, Curaçao itself was formed by ancient coral reefs that were raised above the water as the sea level changed.

From the south eastern tip known as “Oostpunt” to the northwestern tip known as “Westpunt”, the underwater world is completely different and unique. Eastern Curaçao is known to locals as “Banda Ariba”. This area is truly an unspoiled and largely still unexplored sanctuary inside of Curaçao’s only National Marine Park. This preserve has amazing sheer walls covered with extensive healthy coral and sponge colonies while the shallow plateaus are overrun by magnificent examples of Elkhorn, Staghorn and Pillar coral communities. On the other side, Western Curaçao is known to locals as “Banda Abou”.This is a bucolic haven for boat and shore diving, offering near perfect conditions year-round because of the natural shielding from the easterly trade winds offered by the mountain range running through the middle of the Christoffel National Park. 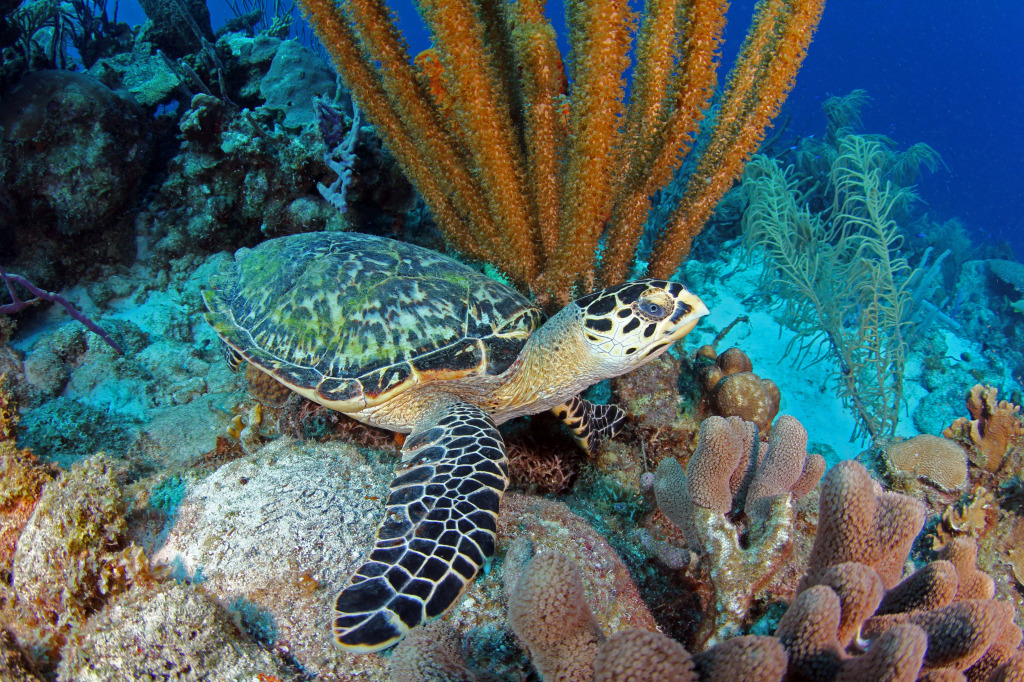 1- Klein Curaçao If you could imagine a picturesque deserted Caribbean island surrounded by warm aquamarine waters, then welcome to Klein Curaçao. Located approximately 6.5 miles off the eastern tip of Curaçao, this is a very special trip for divers and for snorkelers alike. The locals say that the underwater habitats of Klein Curaçao is where everything is bigger and there is more of it with almost the guarantee of turtle sightings, ocean triggerfish and large groupers. This is a true Caribbean dive location which is pristine and unspoiled.

2- Eastpoint (Oostpunt). Located at the very eastern tip of Curaçao’s National Marine Park, this is a MUST DIVE!! Only accessible by boat, this site is largely one of the most pristine and unblemished fringing reef systems on Curaçao, if not the entire Caribbean. Lush gorgonians cover the site, together with hard corals and sponges. A large school of tarpons inhabit the underwater bridge, a natural bridge that was formed by coral formations throughout time. Sharks, eagle rays, large barracuda, and turtles have been spotted at this wonderful Curaçao diving location that has seen very little human impact.

3- Kathy’s Paradise/Smokey’s Often this spectacular dive becomes a drift dive where you literally “fly” east from Smokey’s and end with an amazing finish at Kathy’s Paradise. These immaculate dive locations with large dense corals overhangs lead to sharp drop offs, and this coupled with great visibility provide you with a 360-degree experience that will leave you wanting more upon surfacing! Sharks and stingrays are often seen here too.

4- Tugboat Located in just 5 meters (15ft) of water, this famous tugboat was wrecked just a few yards offshore in a protected bay of Caracassbaai. This site is perfect for divers as well as snorkelers. Easy to access and easy to find a plethora of critters such as seahorses, octopus, lobsters, napping scorpion fish and the odd nudibranch if you can find it!! The tugboat is overgrown with tube sponges and coral and is home to a variety of colorful reef fish too. The resident Majestic blue Parrot Fish and Yellow Tail Snappers guard this site. 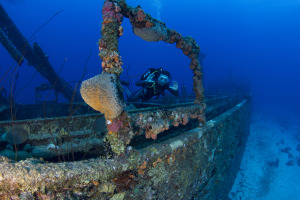 5- Superior Producer This is a 240ft/72m cargo freighter that sunk naturally in December 1977. It is sitting perfectly upright at a depth of 100ft/30m with easily accessible cargo holds and bridge. After 37 years, this wreck is covered with a variety of corals, orange cup and tube sponges, and is surrounded by watchful great barracudas and schooling tarpons. This is an advanced dive site for experienced divers and is available for diving only during cruise ship “off-season”. Sport Diver Magazine rates the Superior Producer as one of the Caribbean’s best wreck dives! 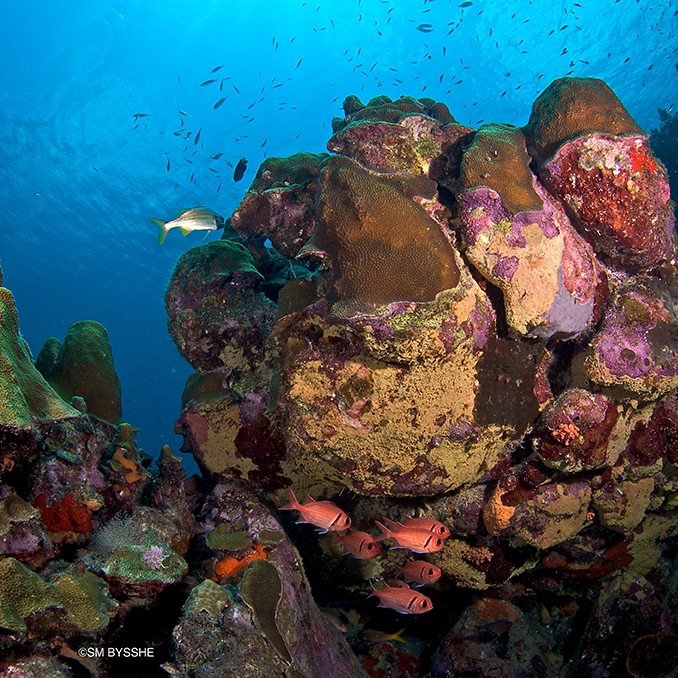 6- Alice in Wonderland. Descending on this site is quite a bit like reading Chapter One – “Down the Rabbit Hole of Lewis Carroll’s 1865 novel Alice’s Adventures in Wonderland”! As you descend you literally feel yourself getting smaller and smaller as the hard coral formations rise up to become larger and larger, growing in some cases over 60 feet/18m in height encompassing a host of hiding places for the unusual characters we have in our story like the pair of resident frogfish and octopus! Of course, we regularly see Hawksbill Turtles, Eagle Rays, large schools of Boga’s being hunted by Yellow Fin Tuna and so on… but really the attraction of Alice in Wonderland is the beautiful coral formations and all that hides within!! The key to diving this site is to dive it “Slow”… believe me, you will be amazed at what you find!!

7- Watamula Derives its name from the Dutch word “Watermollen” (Water Mill) because of the how the currents flow in this #1 Boat Diving Site!! You really never understand what the currents will be doing until you check: sometimes they are flowing North/South, other times South/North and other times they are flowing in a circle!! Watamula offers the diver an intense and sometimes overwhelming spectacle starting with a hard coral field, then a soft coral patch, then finally ending with another hard coral field! It is so intense that the diver really does not know where to look first! In addition to the mind-blowing coral formations, the intensity of the macro life combined with Ocean Trigger fish, Schools of Chubbs and Porcupine Fish will leave you surfacing wanting to don another tank for more!!

8- Mushroom Forest One of the most famous dive sites in Curaçao. Over time, hard coral formations have grown in such a way that they resemble mushrooms, hence the name. Underneath each one of these coral formations an abundance of marine life awaits to be looked at, admired, and photographed. Don’t miss it! You will love it!

9- The Blue Room. This is the perfect place for off-gassing between dives or just enjoying one of the many snorkel trips offered! Located next to Mushroom Forest, the Blue Room is easily explored by snorkeling through a narrow opening that reveal a large air-filled chamber lit up by the sun reflecting off the white sandy plateau in front of the opening… creating a brilliant glow of ambient light in vivid blue!! Inside the “room” you will discover schooling glass-eyed sweepers, lobster, and hoards of silversides! Occasionally you might even get buzzed by fruit bats!! 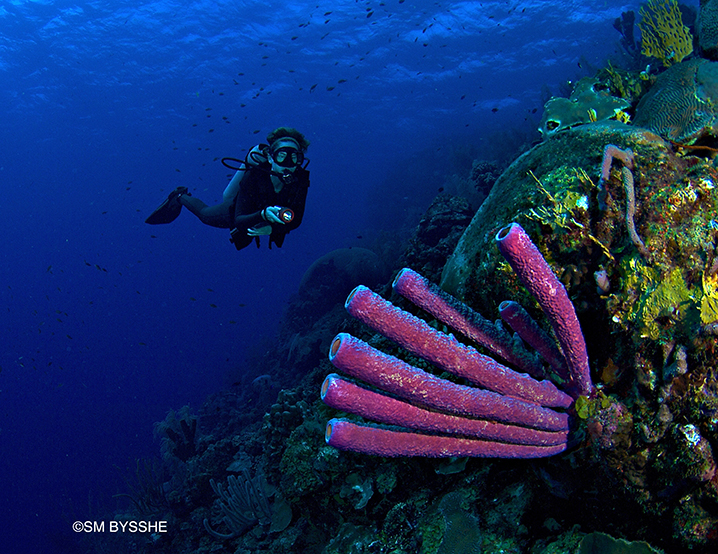 10- Rediho Due to the position of this site in relation to winds and currents, Rediho is a very unique site because of the constant currents washing over the steep drop-offs and beautiful weaving sand channels. With healthy soft corals and hard coral formations, the macro population is booming and like Scooter (the next site over), it’s a great environment for finding seahorses!

The decision should not be to dive either East or West, the decision should be to discover the magic that lies below the waterline, uncovering this best-kept secret of the Caribbean! Don’t wait, take the plunge into the warm turquoise waters of Curaçao and be prepared for your senses to be overwhelmed by a 360-degree kaleidoscope of intense colour and abundant life! We will look forward to seeing your bubbles soon!