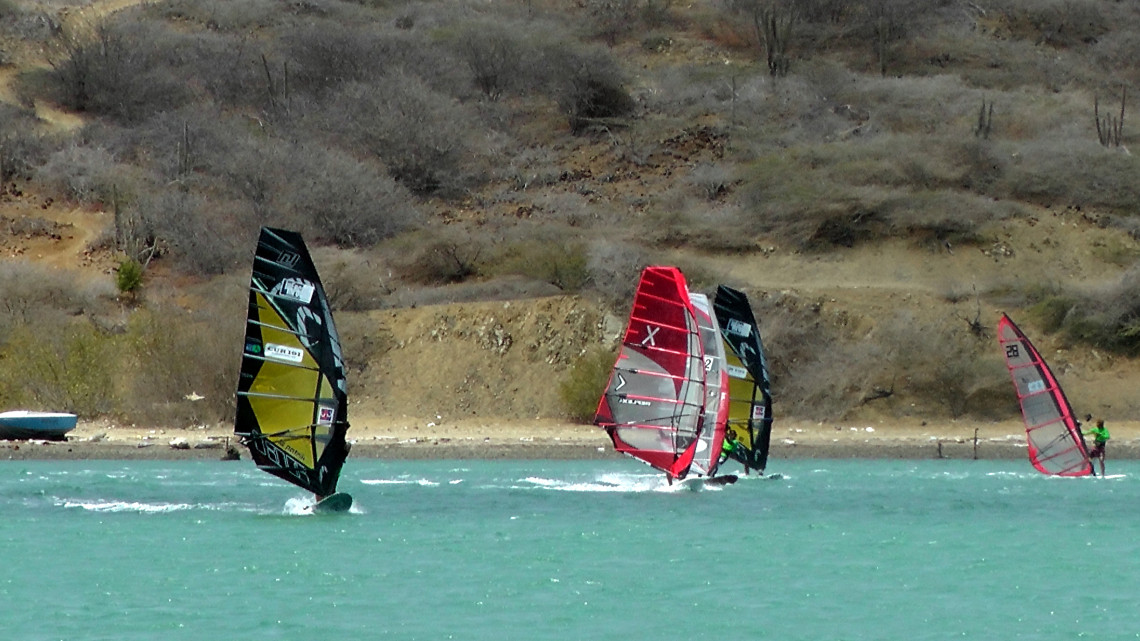 I have to admit, I was a little uncertain when the inflatable motorized dinghy zoomed up to the shore. It was day two of the windsurfing events at the 2015 Curaçao Regatta, just hours ahead of the final race. Fans and supporters were gathered on a floating dock set up in the middle of Spanish Waters Bay. Despite my initial hesitation and with my (soon to be soaked) notebook in hand, I hopped aboard the tiny boat for an unforgettable afternoon.

This event, which took place on April 3rd and 4th 2015, was coordinated by the Friends of the Curaçao Regatta, CurSailing and WSV Curaçao who for the first time organized an official yearlong season of windsurfing competitions. On day one participants competed in a series of point to point races in the peaceful waters of St. Joris Baii. The following day at Spanish Waters, they took part in a variety of races: upwind, downwind and slalom which is a course based race set up around the tiny islands scattered throughout the bay.

More than 25 athletes ranging in ages from 11 to 50 participated in the event. Though medals and awards were given out separately for the different ages and genders, all participants raced at the same time.
I felt lucky to arrive (slightly soggy, but refreshed) during the break for lunch, as it meant that I was able to see the row of brightly colored sails clustered together in the water and the competitors sharing ice cream, laughing and practicing freestyle tricks ahead of the next heat. Even as the horn blew and the boards began to zip past, the energy of the crowd was one of mutual support and excitement.
While this is obviously still a very close knit family, the popularity of windsurfing in Curaçao has grown greatly over the last 10 years as the international community has begun to recognize not only the ideal conditions of our waters, but also the great talent living and surfing here. The overall winner of the weekend’s competition was 16 year old Jean Paul da Silva de Goes. JP, as he’s known to his friends, has been windsurfing for more than 8 years. During that time he has traveled all over the world to compete and has helped to put Curaçao on the map on the international circuit, taking home the U-15 IFCA Slalom JYM World Championship title in Alaçati, Turkey in 2013. This year he will continue to pursue his dream of another championship season when he competes this summer in Reggio Calabria, Italy.

While all participants from the Easter weekend regatta were locally based, the island will host international competitors at the upcoming Curaçao Challenge and Endless Summer events as part of its new annual season. More information on upcoming races can be found at www.curacao.com, or if you’re interested in giving windsurfing a try during your stay you can check out further details on the island’s only school and rental location at windsurfingcuracao.com.

Later in the afternoon, as the final competitor cruised back onto the shore where I first boarded my dinghy and the day’s events drew to a close, I felt a little salty and sun kissed, but very grateful to have spent the day watching the talented athletes compete and getting to know their community. I know I’ll be back to show my support in the near future, and maybe next time I will strap on a board and see firsthand how it feels to cut across the water in the rushing wind.