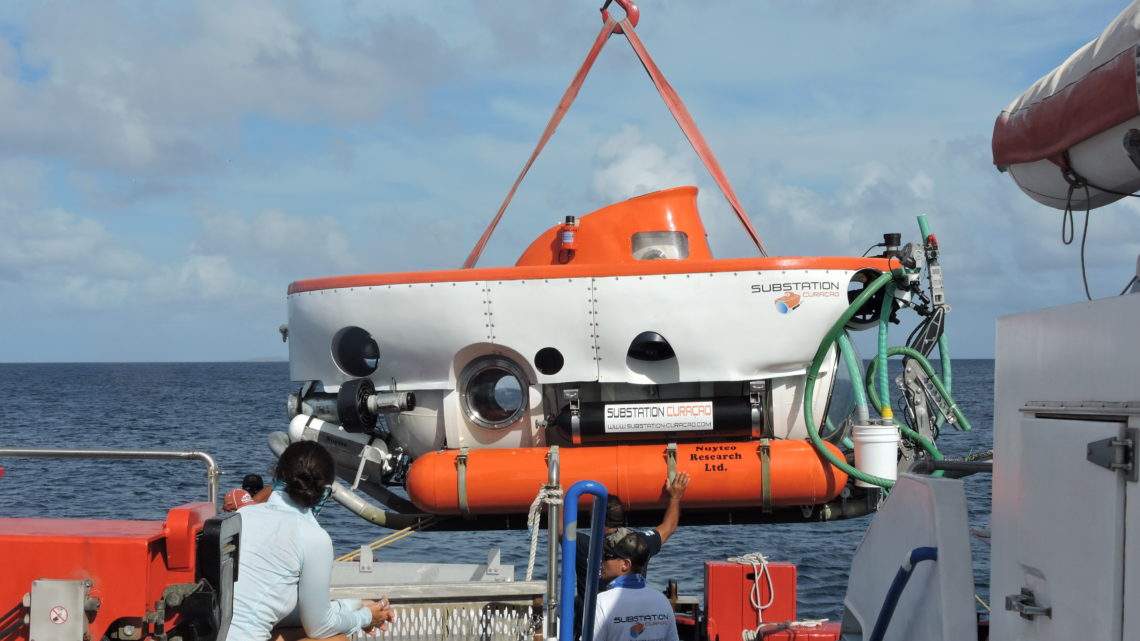 A 4-day Expedition to Klein Curaçao

Dutch Schrier invited me to join the RV Chapman and Substation Curaçao crew for a 4-day expedition to Klein Curaçao (Small Curacao) just 11km southeast of Curaçao. This uninhabited island of 1.7 km2 is dotted with a few beach huts for shade, an abandoned lighthouse and a tanker wreck pounded by the waves on the rougher side of the island. Klein Curaçao is a beautiful dive spot with protected reefs, coral, and clear sparkling water making it easy to spot colorful fish and sea turtles while snorkeling. We will be heading there for tropical reef biodiversity research to discover marine life species living as deep as 1000 feet!

Today, we set sail from Willemstad to Klein Curaçao at 6:00am sharp onboard the 39m Chapman Expedition vessel. As we head out of the harbor of St. Anna Bay on this glorious morning, Dutch recounts the story of this vessel, formerly known as the NOAAS Chapman, an American fisheries research vessel that sailed in the National Oceanic and Atmospheric Administration fleet from 1980-1988. In 1998, the vessel was donated to the University of Puerto Rico continuing to support scientific marine research sailing for six years. In 2008, after years of minimal use, Substation Curaçao purchased the neglected NOAAS Chapman to bring it back to life. It took Dutch and his team 4 years to rebuild the boat turning it into a submarine tender. “This mothership for the deep-diving state-of-the-art manned submersible, the Curasub was also designed to be an expedition research vessel” declares Dutch. The RV Chapman comes equipped with wet and dry laboratories, a full kitchen, dining area and comfortable cabins for up to ten guests seeking new experiences or interested in deep reef research exploration on a liveaboard. Let the adventure begin!

The boat trip is pleasant as we cut through the light surf and approach Klein Curaçao. A lighthouse on a strip of sand shimmers at a distance. As soon as we arrive, three anchors (placed so as not to harm the coral) are attached to the Chapman. I am in awe admiring both the stunning 360° view and the crew working in unison to stabilize the boat. The clear water surrounding us is calm, the island is just a few breaststrokes away, and we will be here for the next 4 fabulous days!

With a skip in their step, (and in mine too!) the crew begins a system check of the submarine propellers, mechanisms, filters and the newest addition: a vaccum hose to collect specimens into a container. Now ready to be unbolted and straps hooked to the floating launch platform, it is carefully lifted by crane and placed on the water behind the stern. Within minutes, the straps are secured to the Curasub and hooked to the crane operated by Dutch who asserts: “Now that’s how its done!” as he eases the sub onto the platform with the crew assisting a smooth transfer. The mission for this expedition: to collect new species that live at a depth of 200 feet and as deep as 1000 feet!

Without missing a beat, Dutch and two sub technicians take turns stepping on the sub’s bridge to slide down an opening into a 4-passenger chamber. Looking out through a porthole into the blue, they begin their descent communicating each step of the way with one of the sub operators who tracks their trajectory and follows with a smaller tender. Seven hours later, they excitedly share that they collected several Butterflyfish, a few Apricot bass and many Slit shells found roughly at 400 feet. But here is the thing – fish need to decompress just like humans do! The receptacle containing thecollected fishes was deposited at 200 feet at a precise location. The task is to return the following day to transport the sealed bucket up to 100 feet and meet up with a diver who will pick it up and ascend with the unsuspecting fishes. I was delighted to join the crew on this mission the next day and amazed when we continued down to 400 feet to explore some more!

Immersing at such a depth where it is impossible to dive with a tank is one of the most indescribable experiences. Gazing out at the deep shades of blue through a porthole watching vibrantly colored fish and coral appear in the sub’s spotlight, I also realized the trust that we put in those who manoeuvre the sub with remarkable alertness and confidence. Time seemed to have gone by too fast when we returned five hours later. Delightful days on the RV Chapman and peaceful nights in my cozy cabin also went by too fast. It was time to return to civilization on the big island of Curaçao. However, Im left with an incredible memory of an epic adventure on the Chapman. I am also grateful to have spent every day with a fantastic crew!