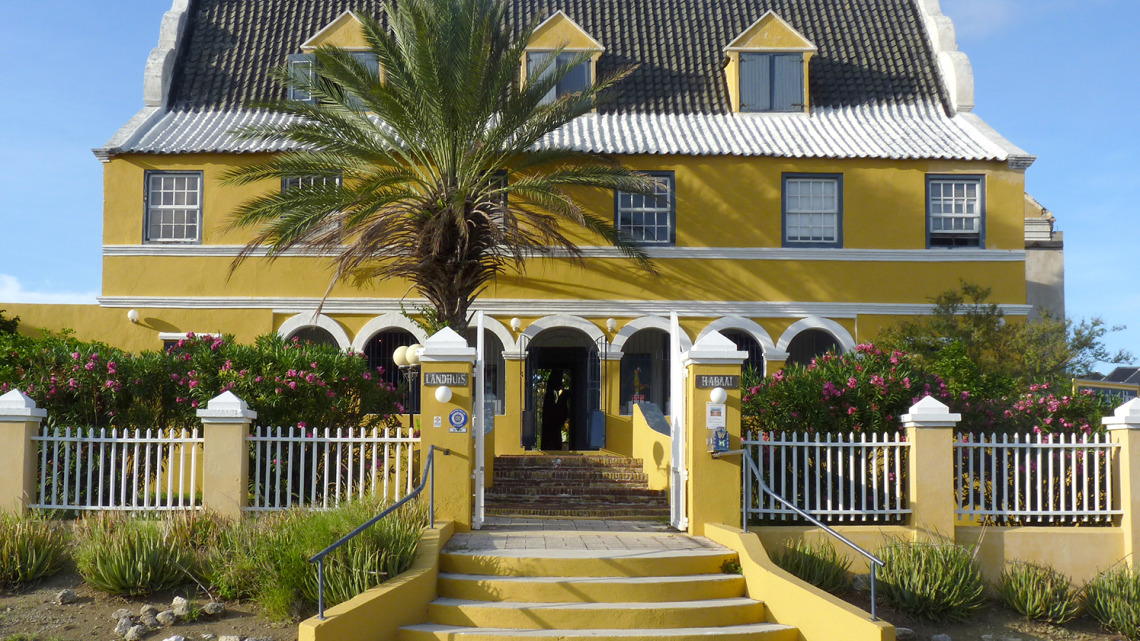 Curaçao has many interesting museums, galleries and Landhuizen worth visiting! Switch things up by learning about it’s diversity, heritage and rich culture.

Den Paradera
“The place where you feel at home” and it is home to a garden that was created one plant at a time by Dinah Veeris in 1991. Veeris’ study of and research into the ancient secrets of healing herbs is preserved in a magnificent botanical garden where she propagates over 300 species of wild medicinal plants. www.dinahveeris.com

Jewish Historical Cultural Museum
Curaçao boasts the oldest standing Synagogue in the Western Hemisphere, as Jews came from the Netherlands, Europe and Asia before 1700. You can learn more about their history and heritage on the island by visiting the museum. T: 461-1633

Kas di Alma Blou    T: 462-8896
For the art connoisseurs, art galleries abound in Curaçao. Papiamentu for “Home of the Blue Soul.” Relax & absorb the Curaçao expression of art – Situated in the heart of Willemstad, just a few steps from the well-known pontoon bridge, Alma Blou is special because it is housed in one of the most beautiful monuments in Otrobanda.

Kura Hulanda Museum  T: 434 7700
Situated exactly where Dutch entrepreneurs traded and shipped African slaves, Kurá Hulanda located in Otrobanda, is a true eye opener. The anthropological museum provides one of the most compelling visualizations of the African slave trade and the role our island played in it. www.kurahulanda.com

Landhuis Bloemhof  T: 737 5775
Discover its historical architecture, fine art exhibitions and surrounding gardens that make it a cherished  cultural and historical venue in Curaçao. Tuesday to Saturday 9 a.m. to 2 p.m.

Maritime Museum   T:  465-2327
Historically, Curaçao’s strategic location and natural harbor made it  a major seafaring and commercial center. The museum, situated in a beautifully restored 17th century building exhibits include antique miniatures and 17th century ship models and maps, some even dating back to 1500.

Mongui Maduro Library  T:  737-5119
This museum presents a fascinating retelling of history with Mr. Maduro’s comprehensive collection of manuscripts, periodicals and so more. New publications are constantly acquired and added making this museum a wonderful source of information on the historical evolution of the island.

The Numismatic Museum   T: 462-5912
Numismatics is the study of or collection of currency. The exhibit here illustrates the evolution of the Antillean currency. It is owned and operated by the Bank of the Netherlands Antilles.

Punda Museum   T: 511-7145
The foundation ‘Then and Now’ opens a new museum about the history of Punda. An impressive photo exhibits and a three-dimensional scale model of 58 buildings depict picture of Punda in the fifties to the seventies.

Ritz Gallery  T: 465.9950
Housed in what was once an ice cream factory, here you will find large stone statues from Indonesia that are for sale. The Gallery is open 7 days a week from 09.00 till 18.00. Entrance is free. Scharloo, Willemstad.

Savonet Museum   T:  864-0363
Very recently opened this is the newest museum offering in Curaçao. The historical plantation complex is an experience for the entire family where the running theme is the interdependence of humans and nature. Portal to Cristoffel park.

Serena Israel Workshop – Atelier
See the famous Chichi® being created at Serena’s Art Factory and buy them in the adjoining Art & Souvenir Shop or at their Souvenir Shop in Punda. Join lively workshops as part of their team and enjoy the artistic Chichi® vibes and paint a colorful Chichi® yourself!  www.chichi-curacao.com

The Archeological Museum Insight into the lives of the island’s past inhabitants with stories told through the many recovered artifacts on display. T: 462-1933

Kunuku House The last remaining Kunuku house that has been kept historically intact is called the Kas di Pal’i Maishi (house of the sticks of corn) and is open to visitors to catch a glimpse of the old-world life in Curaçao.

Children’s Museum This museum provides a rich environment that stimulates children’s natural curiosity and creativity. Ininteractive exhibit zones, children explore and learn through the power of play. It is a place where children feel free and confident to examine, ask questions, explore, create their own masterpieces, and connect with other children. childrensmuseumcuracao.org

Landhuis Jan Kok is on the way to Willibrordus. The interior showcases the art gallery of  Nena Sanchez. She recently passsed away but lives on in her expression through art and in the hearts of other local artist and fans of her work. T: 864-0965

LANDHUIS BRAKKEPUT MEI MEI In 1985, many years after being supervised by the Foundation for the Preservation and Restoration of Historic Buildings, this landhuis and site became a restaurant only serving dinner and a breathtaking place to have a special event.

LANDHUIS KLEIN SANTA MARTHA Built before 1700, this colonial home of the former plantation Klein Santa Martha is located on a hill northeast of Sta. Martha Bay.

LANDHUIS BRIEVENGAT Back in 1750, it was the biggest and most prominent landhuis where aloe was grown and cattle were bred. Devastated by a hurricane in 1877 it was donated the house to a heritage foundation which restored it to its former grandeur.

LANDHUIS KENEPA (KNIP) This colonial landhuis dates back to the start of the 18th century. Once the most prosperous plantation on the island, it is an important monument in the history of Curaçao. It was here that on 17 August 1795 a number of slaves, led by Tula, refused to go to work.

LANDHUIS CHOBOLOBO Built in the early 1800’s, this Country House is located in the center of a 10 hectares piece of land. It’s history is rather unknown, but most likely this mansion mostly served as a country residence for wealthy merchants. It is close to Schottegat to the north-east of Punda.

LANDHUIS DANIEL Established around 1650, it is one of the oldest existing plantation house in Curaçao. According to stories, it was built by a castaway who washed ashore on St. Daniel’s day.

LANDHUIS GROOT DAVELAAR  The revolutionary Venezuelan refugee Guzman Blanco, who later became the president of Venezuela, built this remarkable landhuis in 1865. The eight-sided hall is surrounded by a gallery and a view of ten other colonial homes in the area.

PLANTATION SAVONET  This old landhuis was set on fire in 1804 by the English during the British invasion. It was restored to its original condition early in the 19th century.

LANDHUIS ASCENSION This colonial home founded in 1672 located on the high grounds of a former Indian village, had strategic usage since all neighboring colonial homes were within eyesight. It was crucial in times of danger so people could warn each other in time when a torch would burn in the iron eye on the top gable.

PACHI DE SOLA Built before 1762; rebuilt in the second half of last century. A former rainwater cistern and a former coach-house. This landhuis was restored in 1961 and today it serves as the Government Registration Office.